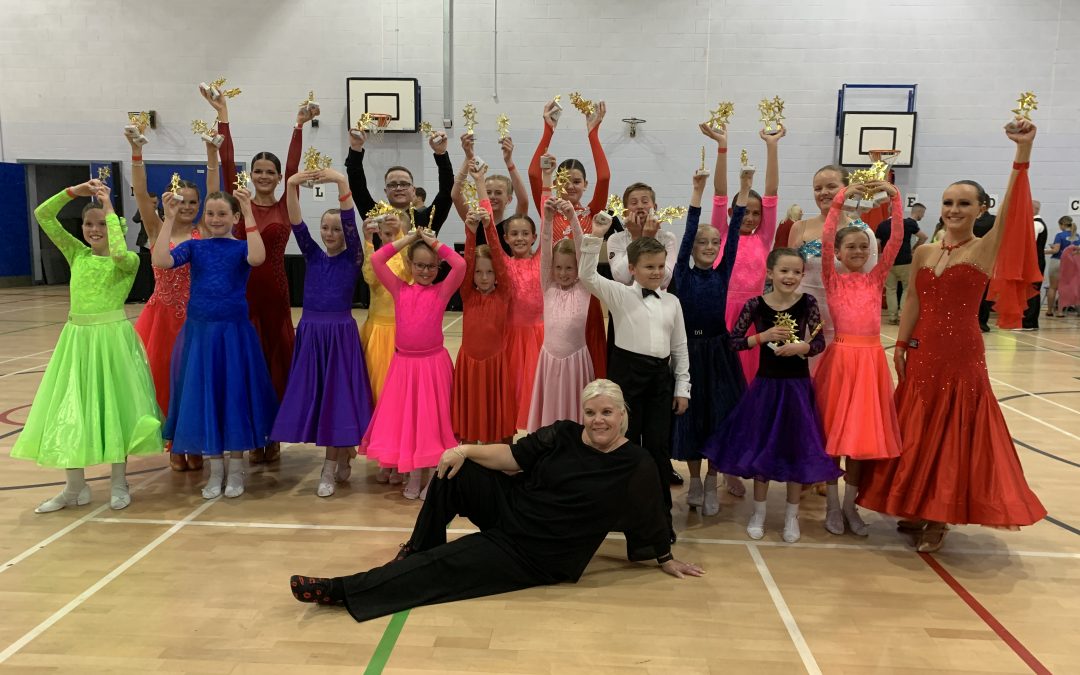 We’ve just returned from the Let’s Dance Competition which took place on Sunday 12th June. We took our biggest competition team to date, with a total of 22 competitors, which definitely kept our teachers on their toes! The overall atmosphere of the day was brilliant. FineSteps was the biggest dance school at the event by far, almost taking up the whole length of the room.

It was lovely to see all our students supporting one another, cheering each other on and being so positive when things didn’t quite go their way. We were also so grateful for our dance Mums, Dads, Nans and Grandads too. They too were cheering and clapping all day long.

Of course, it’s very rare for a competition day to run completely smoothly. Although we had no absolute disasters, there were a few stumbles along the way: a skirt that had to be stitched on, Latin shoes that ended up in the changing room showers and lots of blister plasters for our teachers! But none of that could stand in the way of making the day a success.

We started the day with the Latin dances. We’ve been working particularly hard on learning new routines ahead of this competition and all the students executed their routines brilliantly. The highlight of the Latin section was the 8 to 9 years Individual Cha Cha Cha because we had a record 6 competitors in the category! Walking out on the dance floor with a mini FineSteps army was absolutely fantastic and it was definitely noticed by other schools around the room, with comments such as “look at how many they have”! This time around we seemed to have a large number of categories doing Jive and the judges were asking students to dance for a long time. Let’s just say we were all glad for a rest once the Latin section was over!

After lunch, we moved on to the Ballroom section. All our FineSteppers looked absolutely gorgeous in their Ballroom attire. There wasn’t much variation in dances in the Ballroom category, with most having Waltz and Tango. Charlie must have danced the Waltz about five times in a row, all with different students, all doing different routines! Again we saw some excellent floor craft, particularly from Nikki and Ellis dancing the Tango, squeezing through the tiniest gap with two Viennese Crosses. The best part of the Ballroom was dancing along the side of the room where Team FineSteps were sat, it was like a wall of cheers and number shoutouts. Before the Ballroom results were announced some party music was played, and of course, Team FineSteps has to break out into the hustle! It was just like a FineSteps flashmob. Watch it here.

We also had some amazing results in Ballroom. We had six in 1st, seven in 2nd, five in 3rd, two in 5th and two in 6th.

Overall it was another fantastic competition. Nerves were high at the start of the day but seemed to fade when we saw how excited our youngest competition members were. They were so excited that they were standing, jumping and dancing in the alleyways and had to be told to sit down and conserve energy.

A massive congratulations to five of our students who competed for the first time on Sunday, you were all fab-u-lous! Sorry parents but once you get on the competition train it’s hard to get off, so we hope you’re ready for more competitions in the future.

Thank you to Sally for taking over the clipboard and keeping us organised.

Our motto on Sunday was that it doesn’t matter how you do or where you place, but the most important thing is that you have fun. We all definitely had fun! To see just how much fun we had, have a look at our favourite moments from the day on our Photo Highlights.